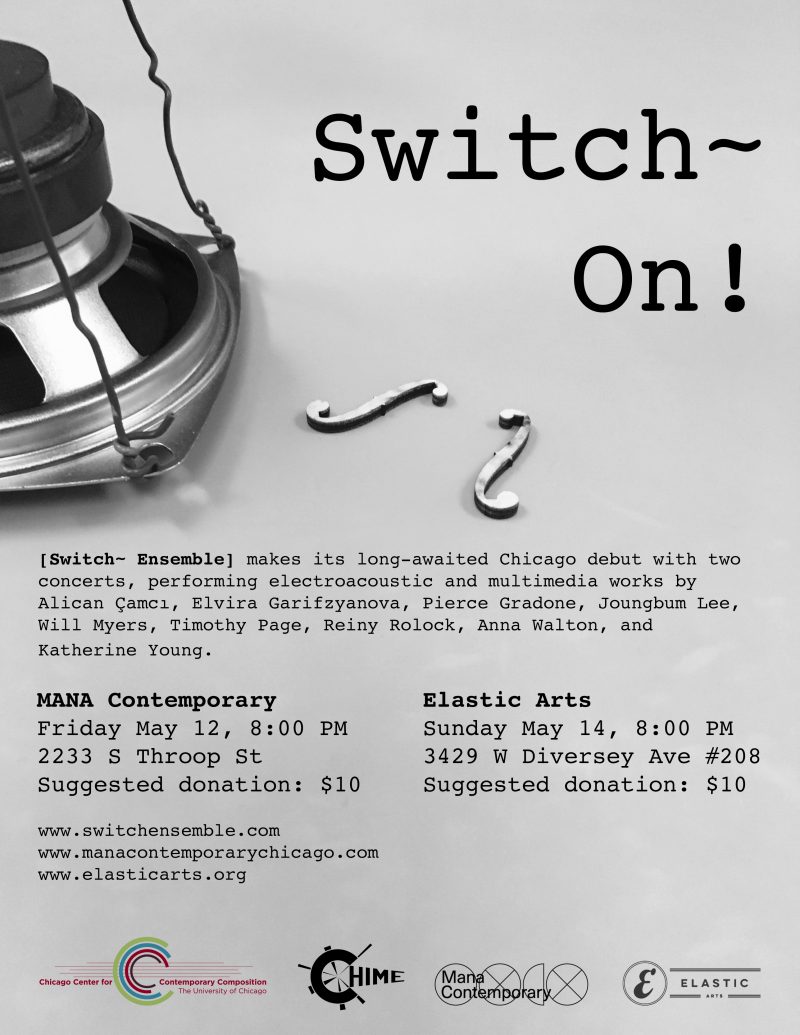 In May 2017, the [Switch~ Ensemble] embarked on its first academic residency at the University of Chicago. Over the course of a week involving several days of rehearsals, an open rehearsal, and two concerts, [Switch~] gave premieres of six new works as well as performances of solo and ensemble pieces from our repertoire. Co-sponsored by the Chicago Center for Contemporary Composition and CHIME Studios(Chicago Integrated Media Experimental Studio), the University of Chicago presented [Switch~] at two off-campus venues: Mana Contemporary and Elastic Arts.

The ensemble’s visit in mid-May was the culmination of a year-long collaboration between members of [Switch~] and UChicago graduate student composers. Switch’s artistic director, Jason Thorpe Buchanan, visited Chicago ahead of the residency to give seminars on various approaches toward the implementation of electroacoustic sounds and visual multimedia. During individual meetings with the participating composers, [Switch~] personnel helped clarify technological needs and artistic goals as the pieces were being written.

The new works explored the integration of live instruments and electronics from many perspectives, including spacious soundscapes inspired by field recordings, to dense, improvisations with algorithmically generated forms, and visual or theatrical works. Alican Çamci created an intersection of field recordings and poetic recitations in his landscape with inscription. Will Myers offered another take on the incorporation of field recordings in his Aquinnah, March 13, which unfolds as a series of three variations on the same sonic material. In his Trio #4, Reiny Rollock blended lush electronics with delicate writing for flute, violin, and percussion.

This residency continues [Switch~]’s mission of fostering the creation of new work with emerging composers. We hope to build upon the relationships we developed during this collaboration and enable composers to continue to carve out their unique visions for electroacoustic or multimedia music.