In the time since its premiere in 2017, we have come to know Alican Çamcı’s landscape with inscription in a more sophisticated and intimate way with each performance. There is something beguiling about the work; although its concept is clear from a first reading, its intricacies bloom with each renewed encounter.

Alican is a composer living in Chicago. We premiered landscape with inscription in May 2017 in our residency with University of Chicago and the CHIME Studio, with subsequent performances in our upstate New York tour in February 2018.

I first met Ali through the FORUM Internationale des Jeunes Compositeurs in Montréal in Fall of 2016, and was struck by his relationship to sound and musical thinking. As he puts it, “[my] recent works feature an investigation of sound as a potentially documentary medium. [I seek] to explore this aspect through the use of field and speech recordings, found sounds, everyday materials in relation to the performative dimension introduced by the musicians in a live situation.”

About this work in particular, he writes, “landscape with inscription is a collision of two soundtracks: one is based on a constant reading and rereading of Ingeborg Bachmann’s Im Gewitter der Rosen, and the other consists of field recordings made in Cowles Bog Trail located in Indiana Dunes, in December 2016. While the former takes place only in the context of performance, the latter (Cowles Bog Soundscape) is a sound piece that can be exhibited in a gallery setting. In doing so, my aim was to locate a condition of sound that is not-music (field recordings), and cast this against a more standard musical scenario that involves a highly granularized speech recording slowly coming together, along with its instrumental synthesis.” 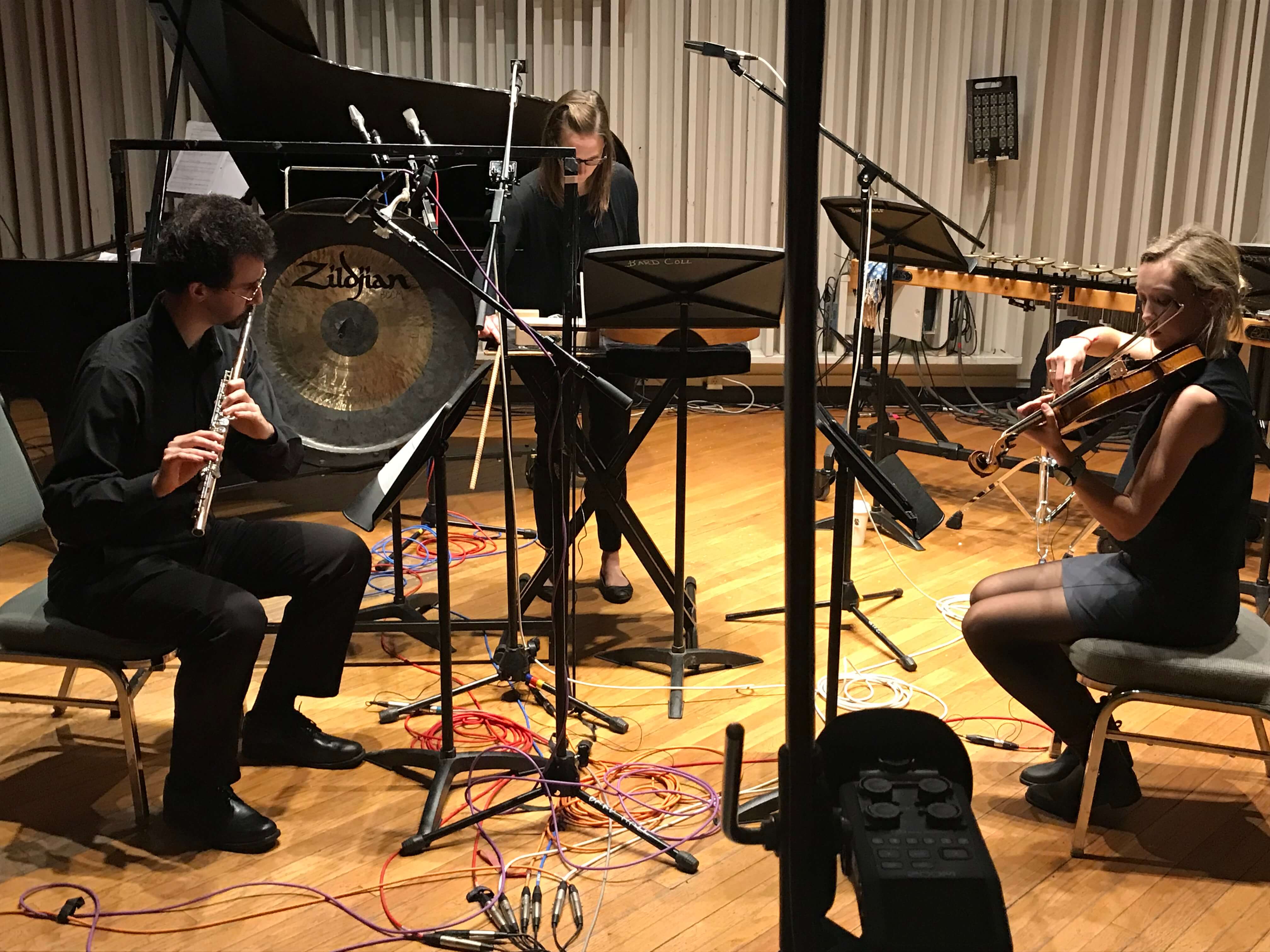 In the Storm of Roses

Wherever we turn in the storm of roses,
the night is lit up by thorns, and the thunder
of leaves, once so quiet within the bushes,
rumbling at our heels.

The canvas of the work is defined by a number of striking performance techniques. All the instruments are lightly amplified, allowing a sound engineer to capitalize on the intricate, intimate nature of the quiet sounds by reinforcing them with greater presence in the hall. The violinist places a cigarette filter between the strings, creating beautiful, unusual timbres and a typically unattainable palette of pitches. The flutist speaks parts of the poem into the face of a large gong—amplified in its own right with a contact mic—and the sympathetic resonance is captured to envelop the ensemble in a gentle shimmer.

The flutist breathes, exhales, and intones phonemes, consonants, and short passages of text. Throughout most of the work, the ensemble plays together in a blurry, lyrical unison that gradually reveals itself to be a recitation of the poem. 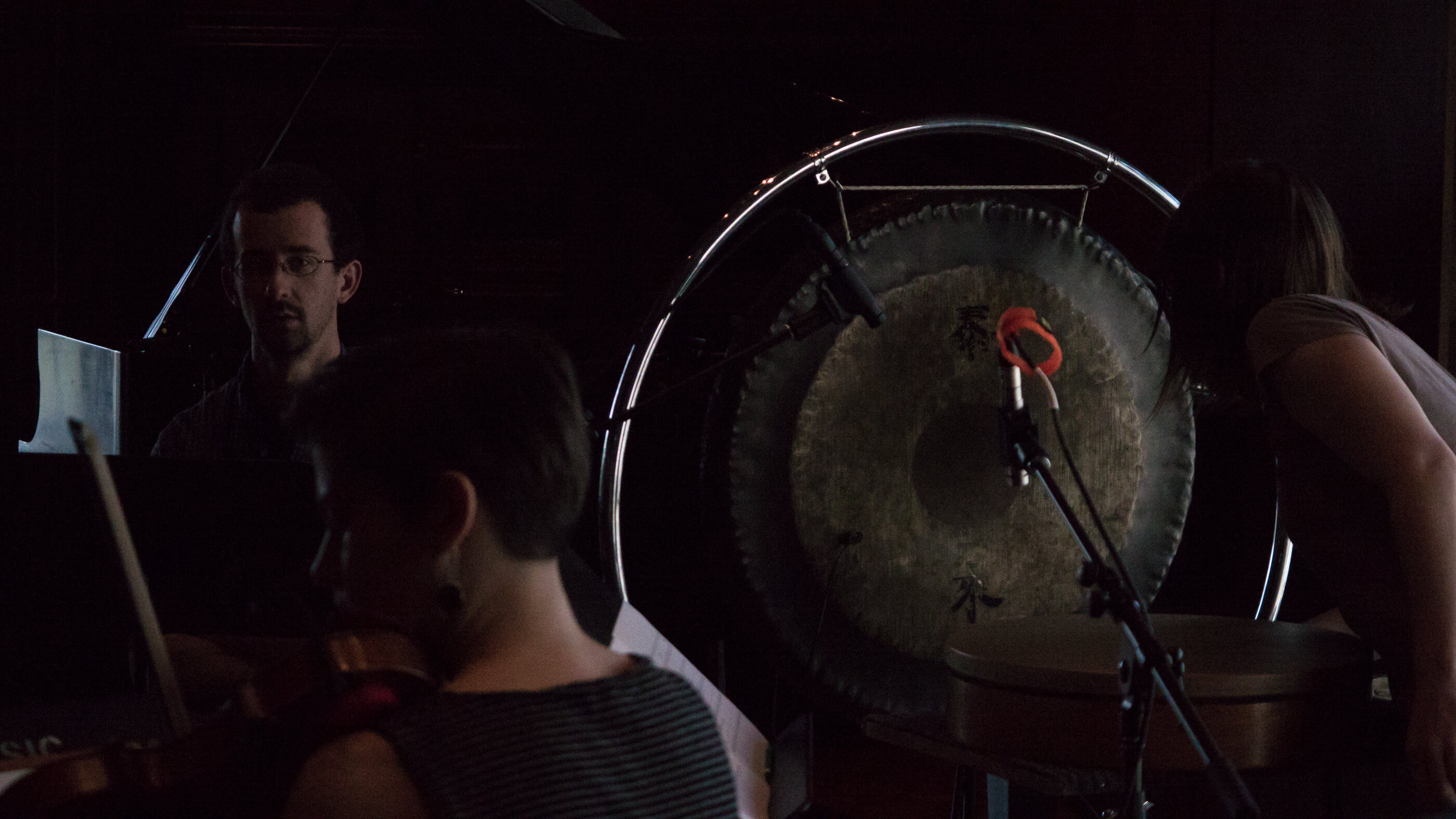 Above all, for me, performing this work is about process. Several critical moments are defined not by prescriptive notation but by following the natural course of an action in motion. For example, the percussionist empties a bag grains onto a small gong; the violinist and flutist follow a pace of time governed by gravity. Other times, the flutist has to play a multiphonic and sing at matching pitch to the violinist, who plays a chord of open strings, detuned to an ever-unpredictable combination of quarter-tones by the filter between the strings. The timing of the work’s conclusion hinges on the entire ensemble listening carefully to the field record from Cowles Bog trail, catch a faint passing train whistle in the background to signal the end is in sight.

It is chamber music in its purest form: each performance an exercise in the ways we move through space, listen to time, and interact with one another on stage. 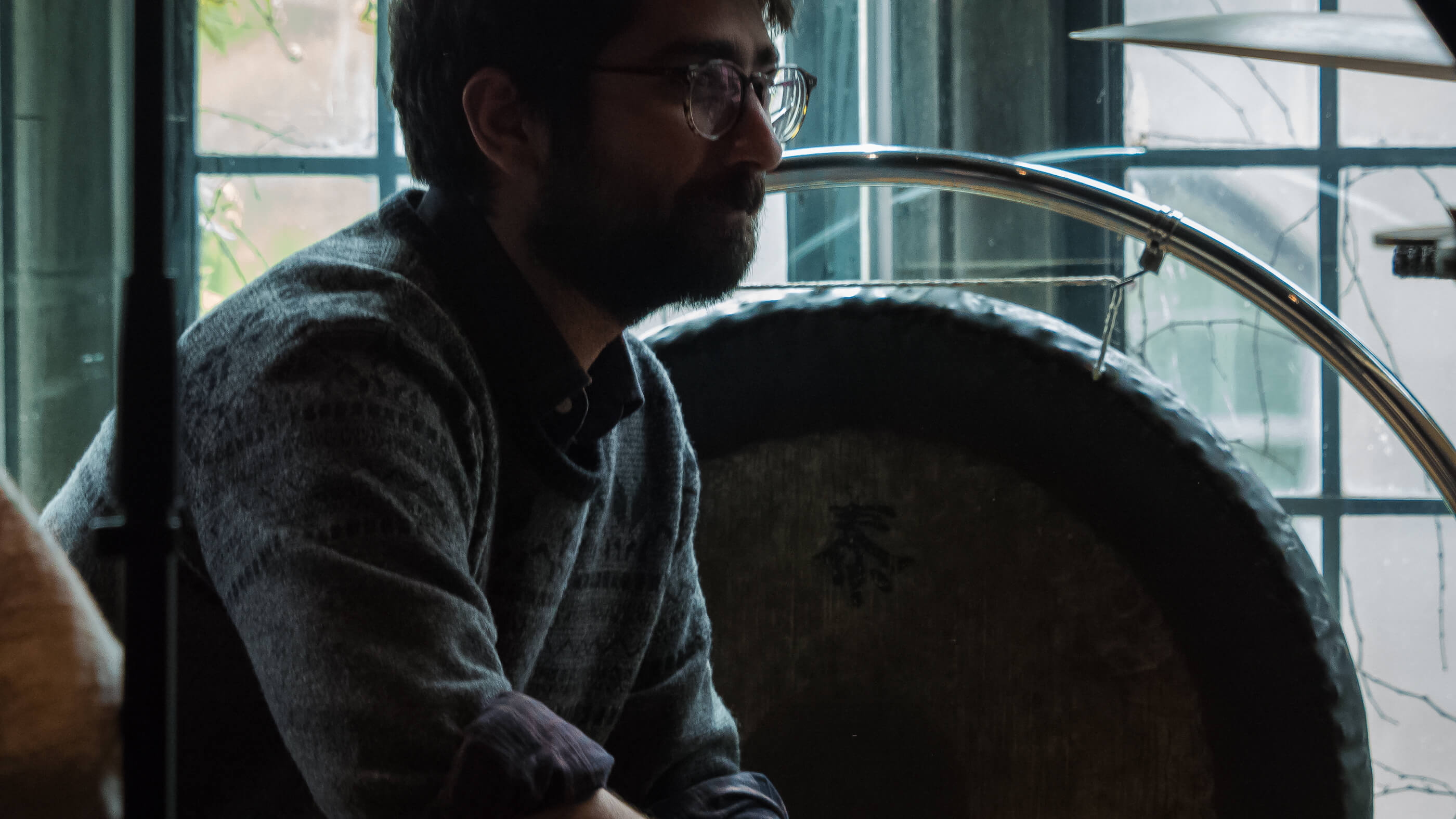 Alican Çamcı’s output includes works for small and large ensembles, electro-acoustic compositions, solo instrumental music, and sound installations. A native of Istanbul, Turkey, he studied composition at the Peabody Conservatory with Michael Hersch. Currently he is a Ph.D. candidate in the University of Chicago, where he continues his studies with Augusta Read Thomas, Anthony Cheung, and Sam Pluta. In addition to his studies there, he has received further instruction from composers such as, Clarence Barlow, Carola Bauckholt, Pierluigi Billone, Beat Furrer, Georg Friedrich Haas, Isabel Mundry, Alberto Posadas, and Matthias Spahlinger in masterclasses and academies such as ManiFeste 2017, Forum des Jeunes Compositeurs 2016, Impuls 2015, among others. His music has been performed by ensembles such as Ensemble Dal Niente, ECCE, eighth blackbird, Ensemble Intercontemporain, Ensemble Mise-en, International Contemporary Ensemble, Le Nouvel Ensemble Moderne, Oerknal!, Spektral Quartet, the [Switch~ Ensemble], and soloists such as Jerfi Aji, Miranda Cuckson, Gleb Kanasevich, Ciro Longobardi, Andrew Nogal, Heather Roche, Eva Zöllner, and Stas Venglevski. In addition to his concert music, his collaborative work with the Turkish filmmaker and media artist Deniz Tortum have been featured in festivals and exhibitions such as Sharjah Biennial Istanbul Offsite 2017, IFF Colombo 2014, SXSW 2013, !F Istanbul 2013, and 22nd Istanbul Short Film Festival.